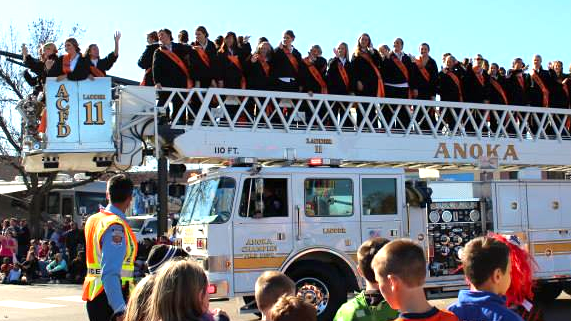 Join us as we celebrate 97 years as Anoka Halloween Capital of the World™ at the largest parade in the state.  Watch overhead as the T-6 Thunder showcase a special flyover for us to open our parade.  Flyover sponsored by Federal Premium.

***Special Notice about reserving space during both; Night Parade and Grand Day Parades

Prior to 4:00 a.m. on the day of daytime parade and 4:00 p.m. on the day of a nighttime parade, no person shall claim or attempt to claim, reserve, occupy or otherwise control public space along the adjoining parade route, either in person or by the placement of any objects such as, but not limited to, ropes, tapes, chairs, blankets, barricades or barriers of any kind. After the foregoing 4:00 a.m. and 4:00 p.m. time restrictions, ropes, tapes, chairs and blankets may be used to reserve public space along the adjoining parade route, provided such objects are removed within three (3) hours following the conclusion of the parade.

Individuals who have had objects removed from public property pursuant to Section 50-255 must claim their objects no later than three (3) calendar days following the conclusion of the parade. All items not claimed by said time may be deemed abandoned and disposed of at the discretion of the City.

Exceptions will be made for our designated community partners and sponsors. Anoka Halloween Inc. reserves the right to decline or refuse any application.

No gore, blood or violent Halloween themes allowed. This is a kid friendly parade.

THANK YOU TO ALL OF OUR SPONSORS